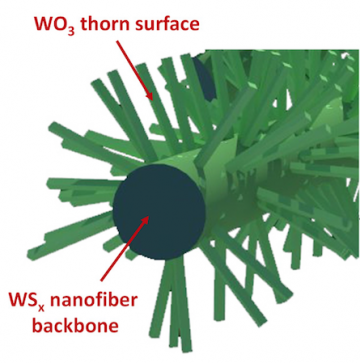 By making an electrode with a plant-like structure and combining two materials, the lab of Prof. Andre Taylor has developed a technology that could pave the way for the practical use of sodium-ion batteries.

The results of the electrode and its thorn-bush structure are published in ACS Nano. Won-Hee Ryu, a former postdoctoral associate in Taylor’s lab, is the lead author of the study.

Lithium batteries are the state-of-the-art right now because of their high capacity. But lithium is a limited, and costly resource. “So in terms of grid storage, where you need a large amount, lithium doesn’t make sense because there’s only a few countries that have a huge amount of it,” said Taylor, corresponding author, and Associate Professor of Chemical & Environmental Engineering.

Everyone, though, has access to sodium, which makes that material very compelling to battery makers. The challenge, however, is increasing the material’s capacity, and its ability to recharge.

Electrode materials are largely responsible for the performance of sodium ion batteries. Anode materials typically used for lithium batteries - such as graphite and silicon - have much less capacity and insufficient cycling when used for sodium batteries, so researchers have long sought out a good substitute.

One possible alternative is a class of metal oxides known as conversion reaction anodes, known for their structural stability. But when used with sodium batteries, they provide a low capacity.

Taylor’s lab decided to try instead tungsten sulfide, another promising but flawed material. Metal sulfides provide a high capacity, but can lead to the dissolution of sulfur and break down the material. “You want your material to be conductive, but don’t want it to degrade under the electrochemical reactions,” Taylor said.

The researchers, however, found that they could prevent this by oxidizing the surface and creating what they call a “protective surface.” This essentially provides the best properties of the oxides and sulfides. An unexpected bonus of the oxidation process is that creates a “thorn-bush” structure, with long and continuous nanofibers. It originated as an accident in the lab, but the researchers recognized its potential use.

“The thing about batteries and electrodes is you want to create things with high-surface areas,” Taylor said, adding that the thorn-bush structure does this by providing more reaction sites for the sodium ions. What’s more, Ryu said, the electrospinning method they used to achieve the structure – a synthetic procedure using simple post-heat treatment in air – is simple and versatile. Typically, making hierarchical nanofibers requires an additional and complicated process, such as chemical vapor deposition.

The researchers are the first to report the synthesis of tungsten trisulfide (WS3) as a potential anode for high capacity sodium ion battery. Ryu said the use of WS3 allows for a facile insertion and extraction of sodium ions.

“It’s a system to show that there’s a new way to build something,” Taylor said. “We’re pretty excited about it.”

Ryu, who conducted all the research for the study while at Yale, is now an assistant professor of chemical & biological engineering at Sookmyung Women’s University.

Primary funding for the study came from the NatureNet Program of the Nature Conservancy.