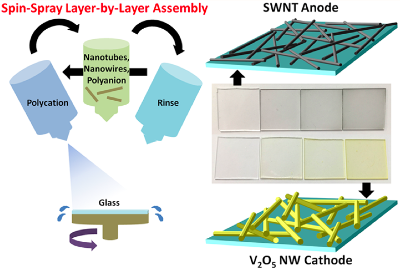 Emerging applications in wearable devices require unique functionalities in order to efficiently implement sensor systems having the desired capability and form factors. As an example, integration of energy storage remains a key factor limiting the capability for many wearable applications-ranging from activity monitoring to personal health and remote healthcare. Furthermore, with new technology developments such as electrochromic films, “smart glass”, or low power displays, not only has power become a premium, but added functionality such as transparency may be required. The ability to controllably and selectively add or combine functionalities at the device and materials process level provides an enabling capability that will foster the innovation of new and unique technologies impacting wearable electronic devices.

To create the electrodes for the energy storage cell, SSLbL was utilized to optimize the conductivity and transparency of single walled carbon nanotubes (SWNT) for the cathode, and vanadium pentoxide (V2O5) nanowires for the anode. For each material, the authors investigated coatings consisting of 50-150 bilayers, with each bilayer having a nominal thickness of ~2 nm. As expected the coating thickness impacted both transparency of the cell as well as cell performance. Optimization of depositions for each electrode demonstrated >87% transparency while exhibiting 23 and 7 µA-hr/cm2 capacity for cathode and anode respectively at 5 µA/cm2. Overall cell capacity demonstrated 5 µA-hr/cm2 over 100 charging cycles. While these performance numbers may not be impressive compared to bulk or thick film batteries, it represents the ability to trickle charge and provide power for application requirements where there may be no alternative. More importantly, it illustrates the power of this nanomanufacturing process method to impart specific and controllable functionality at the nanomaterial level, providing an “atoms to product” or bottom-up methodology for device design.