Novel electronic materials ranging from conducting polymers to advanced composites have been developed with the aim of replacing their inorganic counterpart.The motivation for employing these novel materials in electronic applications lies not necessarily in better performance, but in lower cost, room temperature fabrication, and characteristics such as mechanical flexibility.

Transparent conductive materialspervade modern technology, providing a critical component for touch screens, organic light emitting diodes (OLEDs) and solar cells. The most common materials at present are doped metal oxide films such as tin-doped indium oxide (ITO), which has dominated the field for several decades. Their widespread application could largely be attributed to the ability to deposit these materials with controlled parameters including thickness and doping concentration. However, emerging novel optoelectronic devices raise new requirements for transparent conductive electrodes (TCEs), which include lightweight, flexibility, low cost, and compatibility with large scale manufacturing methods. These requirements limits the use of ITO because ITO films are brittle, restricting their use in flexible optoelectronic devices. In addition, ITO is increasingly expensive because of the limited availability of indium, which is at 0.25 ppm in the Earth’s crust and is just three times as abundant as silver. In our lab, the following project are carried out:

The unique optical, electrical and mechanical properties as well as solution processability of carbon nanotubes render it a promising candidate for the nextgeneration electronic devices. The development of technologies that can simultaneously optimize several key and, in some cases orthogonal, parameters such as conductivity, transparency, morphology and mechanical properties is very challenging yet of vital importance. We have developed a superacid slide casting method to achieve that goal. In addition, studies that combine carbon nanotube with silicon, a well-characterized semiconductor, could provide valuable insight into how photo-generation, transport, and dissociation of excitons and charge carriers function in large ensembles of CNTs. Optimizing this interface could serve as a platform for many next generation solar cell devices including CNT/polymer, carbon/polymer, and all carbon solar cells. 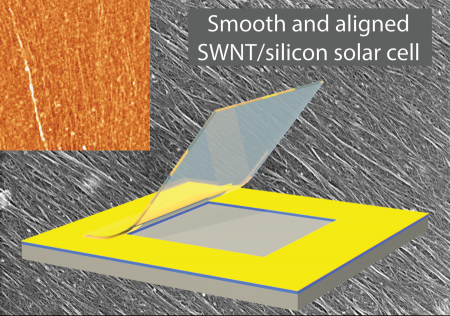 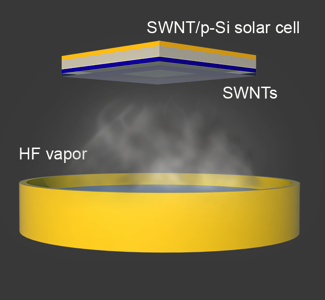 Above Left- SEM imaging of aligned SWNT with an overlay diagram of the solar cell with the SWNT film layered as a final step. Above Right- HF Vapor treatment of the finished cells to improve the SWNT film’s n-doped character by oxygen removal.

1. Increasing the range of the spectral absorption of light 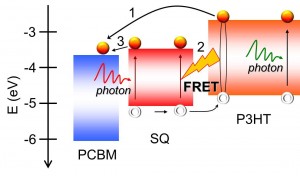 Nature is always our best teacher. Considering how small the photosynthetic reaction sites are in a leaf, some highly efficient ways of transferring, e.g. Förster resonance energy transfer (FRET), the captured photon energy from the pigments to reaction centres must come into play. Although FRET is a well-studied phenomenon in other areas of research, there had been very little effort to employ FRET to improve solar cell performance. To realize this idea, we specifically selected a photoactive material with a high light absorption coefficient and a  counterpart to comply the absorption-emission spectrum overlapping rule of FRET.

2. The squaraine prefers to dwell at the interfaces of P3HT and PCBM, leading to developed ordering of the interpenetrating network.

3. The properties of the P3HT and squaraine optically satisfy conditions for non-radiative energy transfer process, i.e. FRET, which facilitates the smooth migration of excitons towards the interfacial heterojunctions where charge separation occurs.

This architecture transcends traditional multiblend systems, allowing multiple donor materials with separate spectral responses to work synergistically, thereby enabling an improvement in light absorption and conversion. Our approach offers a more viable solution than designing or seeking a single material to capture energy from the full solar spectrum. By strategically combining different materials with the proper spectral range to take advantage of FRET, more photo-excited energy, which may dissipate as heat, can be extracted out of solar cell into electricity. This opens up a new avenue for the development of high-efficiency polymer solar cells