The synthesis of catalysts using carbon nanotubes and nanofibers as supports is gaining considerable attention due to many of their valuable properties, such as:

Recently, we developed a synthesis approach of decorating carbon nanotubes and nanofibers using supercritical fluids with metal catalysts, such as platinum, nickel, and other transition metals. This approach circumvents the need for harsh chemical pretreatments typically used for decorating these 1-D carbon supports. These transition metal supported catalysts can be used for many applications such as: PEM fuel cells, direct alcohol fuel cells (DAFCs), and clean water applications.

The Pt/C materials synthesized in this one batch process were evaluated in a PEM fuel cell and showed promising results. In particular, these materials demonstrated higher Pt utilizations when formed in the presence of surfactants such as sodium dodecyl sulfate (SDS).

In addition to nanoparticle supported catalysts the TMD Lab is also pursuing the use of bulk metallic glasses as electrocatalysts.  Bulk metallic glasses are multicomponent alloys that can be easily vitrified and formed into relatively large amorphous sections.  Specifically, a platinum based alloy, Pt57.5Cu14.7Ni5.3P22.5 (Pt-BMG), which can be formed into nanowires using a top down process. These Pt-BMG nanowires have high conductivity, surface area and lower cost compared to pure Pt.  The Pt-BMG nanowires were also found to have high electrocatalytic activities, low CO poisoning and high durability compared to standard Pt/C catalysts.  Along with the catalytic properties of the BMG catalysts we have are also studying the effects of dealloying and other physical properties of the BMG materials. 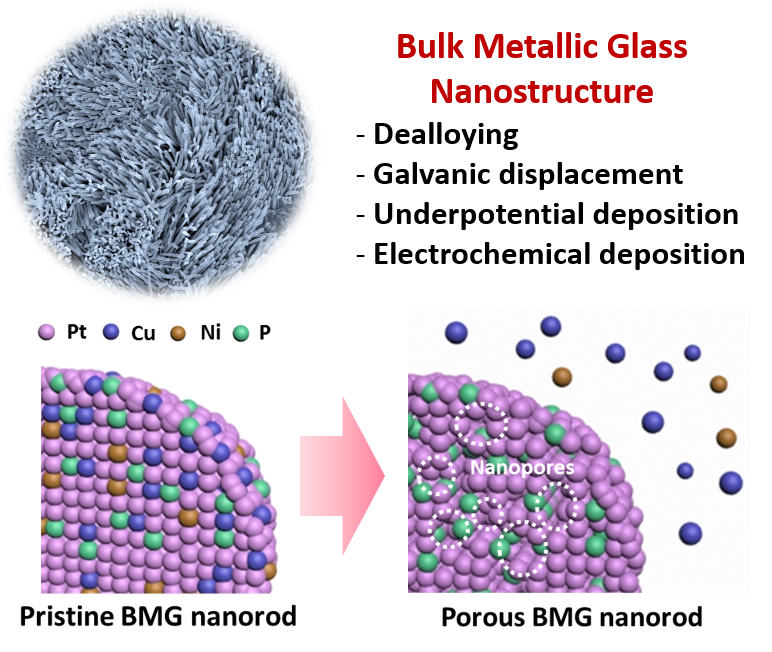