Layer-by-layer (LbL) assembly is a powerful and broadly applicable nanofabrication technique which involves the sequential adsorption of polyelectrolyte pairs to generate multilayer thin films. This technique enables the generation of nanoscale coatings with highly controllable properties which include opacity and color, mechanical strength, and electrical and ion conductivity.

Our work with the LbL technique has involved the generation of functional multilayer films useful in fuel cells and microscale batteries. Specifically, we have generated fuel cell membrane-electrode-assemblies (MEA) using LbL and showed that ultrathin, homogeneous multilayers with integrated Pt-catalyst exhibit increased Pt-utilization through optimization of the triple-phase-boundary (TPB) region. Additionally, we have developed a spin-spray LbL technique (SSLbL) that allows superior nano-level control over deposition and drastically reduced processing times (on the order of 13 sec vs. 45 min for conventional dip-coating LbL). We also demonstrated the ability to tune the conductivity of polymer-composite multilayer films by varying deposition conditions like spray times, spin rate, active heating, and polyelectrolyte concentration. The SSLbL technique has been used to generate ultrathin lithium battery electrodes with improved energy and power densities. Recent modeling work has also supplemented our understanding of electrical percolation in conducting composite multilayers. 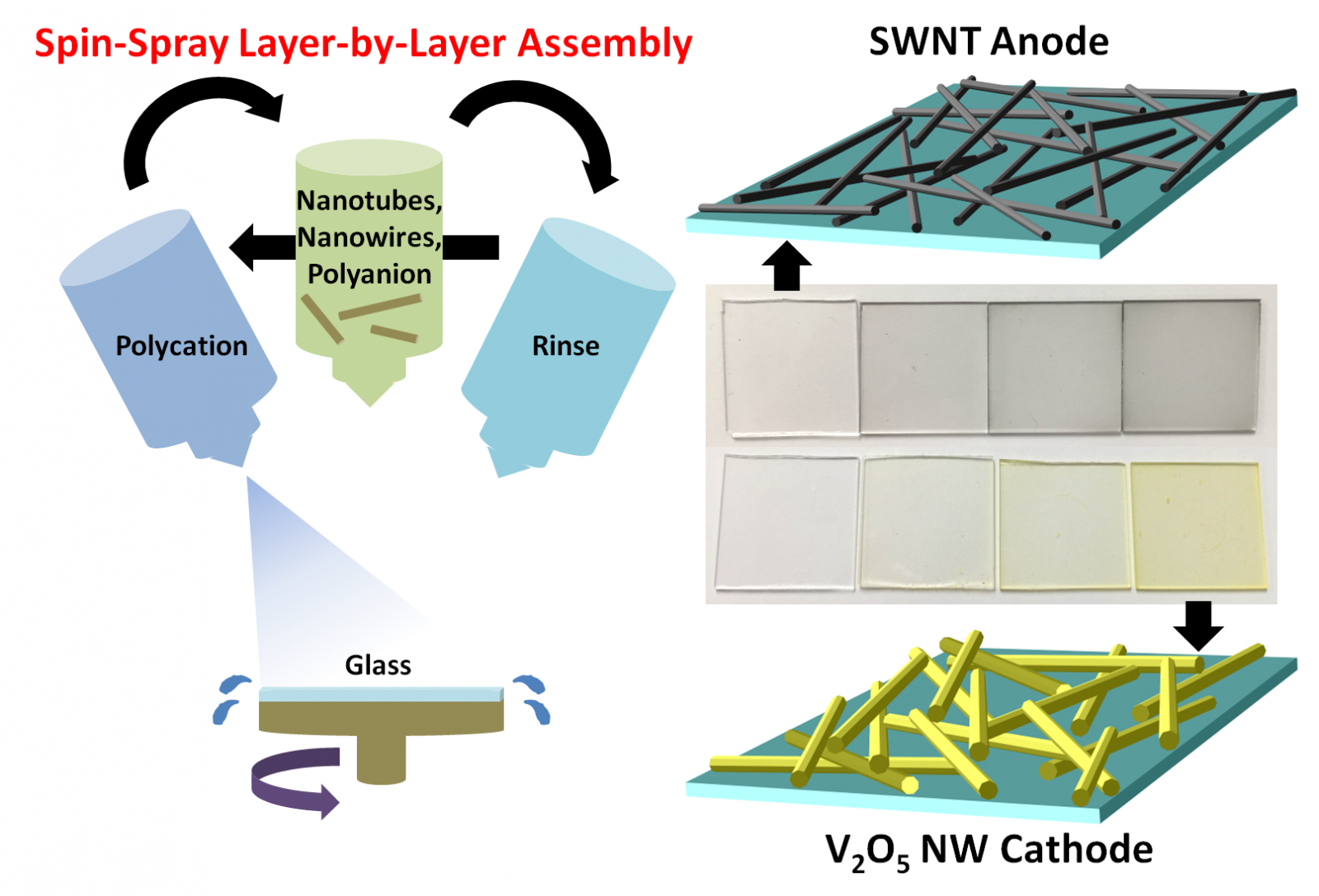 Above-  Schematic of the spinspray layer-by-layer (SSLbL) process for the deposition of 1D nanomaterials.

The Mayer rod coating method is a scalable technique for making solution-processed thin films in a controlled manner. Fluids that can be effectively coated by the Mayer rod method can often be adapted to more controllable, higher-throughput methods. Mayer rod is rolled over the fluid leaving a wet film. The thickness of the final dry film is controlled by the concentration of the fluid as well as by the diameter of the metal wires that wrap around the metal rod. A critical aspect in the rod coating process is preparation of the coating fluid, which should have specific rheological (flow) behavior and wetting properties. The coating fluid should carry sufficient solids to form a uniform and continuous layer upon drying of the coated film. The surface tension of the coating fluid should be sufficiently low to facilitate its spreading on a wide range of substrates and avoid defects like contact line recession and dewetting. After deposition, the viscos- ity of the coating fluid should be sufficiently high to slow secondary flows induced by surface tension and dewetting forces, allowing the film to dry without flow.

Our team has developed an inkjet printing (IJP) process for the fabrication of fuel cell electrodes which improves film uniformity and control over active material loading. The system also provides an opportunity for process automation.

For fuel cell applications this technology resolves many of the problems with previous methods of catalyst deposition. We have shown that inkjet printing can be used to deposit small volumes of water-based catalyst “ink” solutions on carbon paper and Nafion. Analysis of the thin film electrodes synthesized by this method indicated ultra low platinum loading and good dispersion. With assembly of these printed electrodes into a microelectrode array (MEA), we were able to show improved performance compared with electrodes synthesized by screen printing and hand painting methods.

Using nanoimprint lithography (NIL) to fabricate electrodes we have been able to generate structures with high specific Pt surface areas for use in micro-fuel cell devices. These structures may also be incorporated into a wide range of microsystem devices including sensors or microfluidic devices.